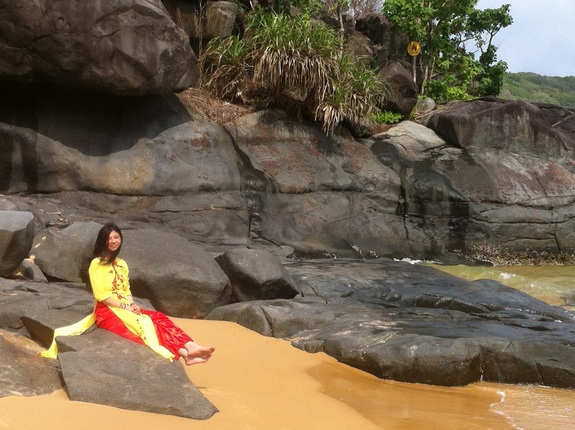 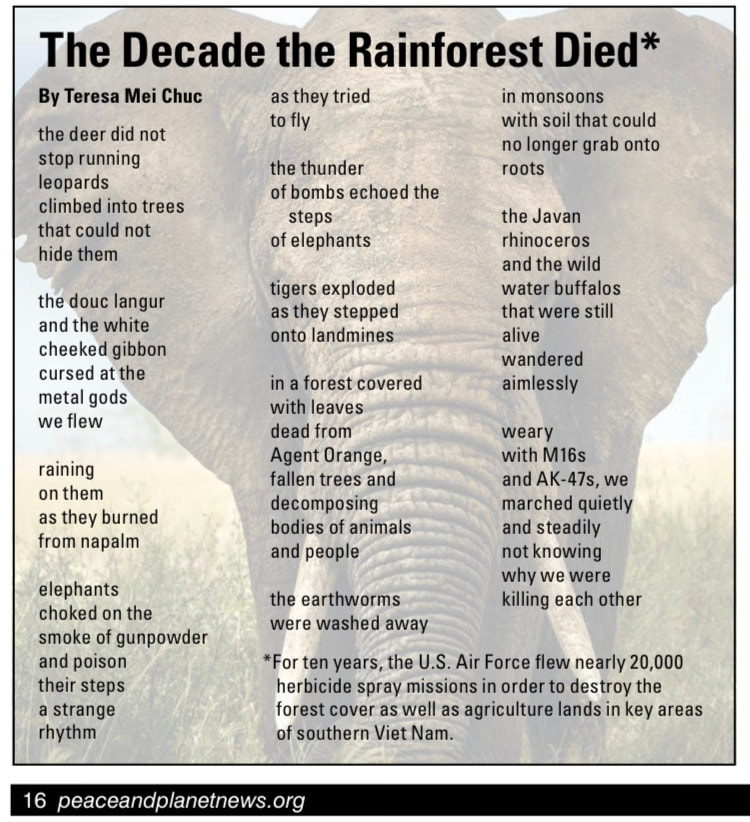 ​A haiku and a cherita (http://www.thecherita.com/)  by Teresa Mei Chuc appear on Poets Salon: Hibernation at https://www.coloradoboulevard.net/poets-salon-hibernating/?fbclid=IwAR22Nys_2mcmHTlmTPck0L14Mf1XCHVmFa5hhvVMnezVZd672EANYbEX7U4

​Teresaś poem inspired by a still or moving image from  AT FIRST LIGHT: THE DAWNING OF ASIAN PACIFIC AMERICA in the upstairs galleries of the Japanese American National Museum will be on display on Thursday, September 19, 2019 at 7 p.m. Location: Tateuchi Democracy Forum, 111 North Central Avenue, Los Angeles, Little Tokyo. Admission: Free to the public  http://www.janm.org/exhibits/at-first-light/events/

​​https://vcmedia.org/latest-news/reflectionsrefractions
​
Teresa Mei Chucś poem, ¨Quan Âm on a Dragon,¨ is in the online and print versions of the Summer 2019 Veterans for Peace Newsletter:
https://www.veteransforpeace.org/files/1915/6356/8365/VFPNews_2019.07_Newsletter.pdf. 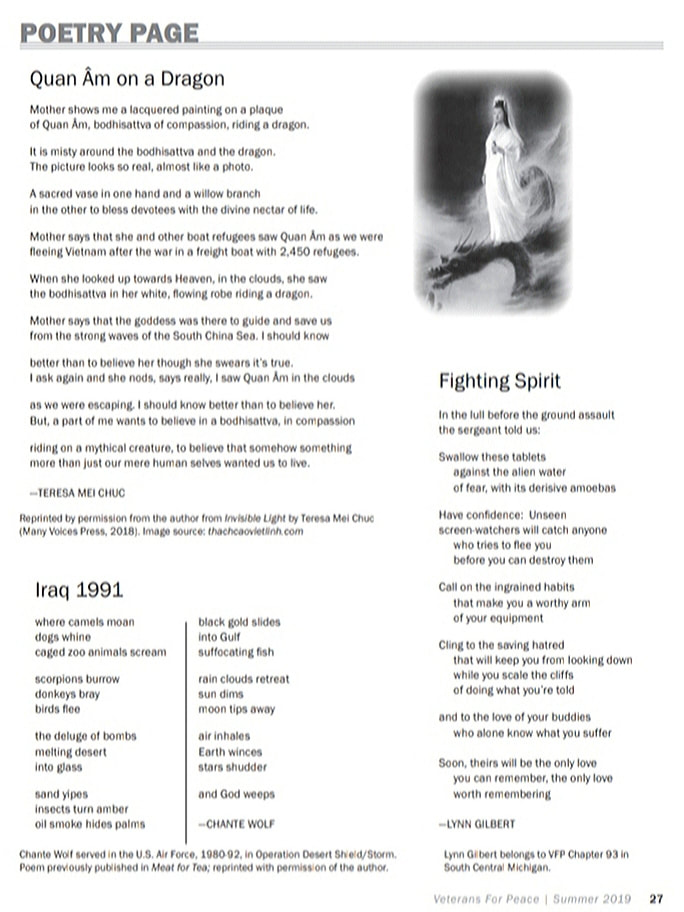 "Love After Fukushima" was published in the online issue of LA BLOGA's Fukushima Daiichi/Pacha Mama Special Edition on Tuesday, March 22, 2016.

A Note from Teresa:

Deepest gratitude to editor Nguyễn Thành Phong for publishing the poems and to Poet Nguyen Quang Thieu for the introduction.

Poet Nguyen Quang Thieu was the first Vietnamese poet that I ever read about five years ago when I was studying for my master's degree. Nguyen Quang Thieu's beautiful language and heart-moving imagery of the landscape of my motherland and the story of its people in his poetry book, THE WOMEN CARRY RIVER WATER, translated by Nguyen Quang Thieu and Martha Collins, had a huge impact on me.

I am profoundly honored and grateful that my poems are introduced in my motherland, Vietnam, by the first Vietnamese poet I ever read and whom I greatly admire. My heart is warmed beyond words.

Teresa Mei Chuc's poem, a villanelle, "Fried Pork Skins," appears in CONSEQUENCE Magazine, Volume 8: Spring 2016. http://www.consequencemagazine.org/
Two poems by Teresa Mei Chuc, "Accents" (in Vietnamese translation) and "Names" (in English and Vietnamese translation), appear online in Tương tri  https://tuongtri.com/category/teresa-mei-chuc/
Teresa Mei Chuc's personal essay, "Vietnamese Globe - Divided by War, United by Poetry and Compassion," about her return journey back to her motherland, Vietnam, was published in its entirety in the original English in the U.S. by ﻿Dissident Voice﻿. http://dissidentvoice.org/2015/07/vietnamese-globe-divided-by-war-united-by-poetry-and-compassion/

Teresa Mei Chuc's personal essay about her special journey back to her motherland, Vietnam, in Summer 2015 was abridged and translated into Vietnamese, "Hàn gắn bằng thơ ca và đồng cảm," and published on July 5, 2015 in the newspaper "Labour and Social" No. 80, page 6 (Hanoi,Vietnam) as well as in the Internet newspaper "baodansinh.vn"
Three haiku/senryu by Teresa Mei Chuc appear in Drawn to the Light: 2015 Southern California Haiku Study Group Anthology. ﻿http://socalhaiku.blogspot.com/
Teresa Mei Chuc's poem, "Quan Am on a Dragon," appears in the 17th issue of ﻿﻿Whitefish Review﻿﻿, "Mythic Beasts and Monsters," released on Friday, May 29, 2015.  http://www.whitefishreview.org/order.htm
Two poems by Teresa Mei Chuc, "Family" and "Chôm Chôm," appear in the Vietnam Issue of ﻿﻿Masque & Spectacle, released on June 1, 2015. http://masqueandspectacle.com/2015/05/30/2-poems-teresa-mei-chuc/﻿
Four poems by Teresa Mei Chuc, "Names," "Photosynthesis," "the decade the rainforest died," and "I Took Nothing," are forthcoming in the anthology Their Own Bare Hands (﻿Unbound Content﻿, 2016), the 2015 Bridgewater International Poetry Festival Anthology.
Three poems by Teresa Mei Chuc, "Praying at the Cemetery on Con Son Island," "Mother," and "Deep in a Forest," appear in ﻿TheThe Infoxicated Corner at TheThe Poetry Blog﻿.  http://www.thethepoetry.com/2015/07/infoxicated-corner-three-poems-by-teresa-mei-chuc/
Two poems by Teresa Mei Chuc, "The Gambler" and "Agent Blue," appear in a special issue of ﻿﻿Kyoto Journal﻿﻿.
http://www.kyotojournal.org/the-journal/fiction-poetry/vietnam-war-poetry/

Teresa Mei Chuc's poetry appear in the anthology, Inheriting the War: Poetry & Prose by Descendants of Vietnam Veterans & Refugees (W. W. Norton, 2017) edited by Laren McClung, Cathy Linh Che and Ocean Vuong. The anthology is a collection of poetry and prose by descendants of Vietnam veterans and refugees from all sides of the war. Forthcoming in 2017.
Teresa Mei Chuc's poem, "the photograph of the albatross," appears in San Gabriel Valley Poetry Quarterly (Summer 2014).
Year of the Hare by Teresa Mei Chuc, a short story in vignettes, was translated into Vietnamese by Trần Huy Quang and published online in văn việt  http://vanviet.info/van/nam-cua-tho/
Teresa Mei Chuc's poem, "Joe the Gambler," is published in MO' JOE: THE ANTHOLOGY (Beatlick Press)
Teresa Mei Chuc's poem, "ocean in a conch shell," appears in Hummingbird: Magazine of the Short Poem. http://www.hummingbirdpoetry.org/past-issues/voume-24-number-2
Teresa Mei Chuc's translation from the original Russian of an untitled poem by Anna Akhmatova appears online in Hypothetical Review on April 15, 2014. http://hypotheticalreview.com/everything-else-2/april-monthly-feature-anna-akhmatova-translation-by-teresa/
3 poems by Teresa Mei Chuc, including "Depleted Uranium," appear in the inaugural print issue of The Anachronist East (based in Brooklyn, NY).
Teresa Mei Chuc's essay on the craft of writing, "Dark Corners, Dragon Princesses, Gestation, Trust and Gratitude," and two of her poems are featured on Bridle Path Press' "From the Masters" series in June 2014. Two additional poems, "The Guillotine" and "The Gambler," were featured on Bridle Path Press in June 2014.  http://www.bridlepathpress.com/FromtheMasters/tabid/185/Default.aspx
Teresa Mei Chuc's poem, "Pencil," appears in The Tattooed Poets Project along with photos of her tattoos, published on April 4, 2014. http://tattoosday.blogspot.com/2014/04/the-tattooed-poets-project-teresa-mei.html
A poem, "Pencil," appears in The Good Men Project, published on March 24, 2014.
http://goodmenproject.com/featured-content/chb-pencil/
A poem, "Donna," appears in Race in U.S. Education Anthology (The Teacher's Voice).

Two poems, "furcula" and "I wonder if," appear in Hawaii Pacific Review.

Year of the Hare, a short story in vignettes, was translated into Vietnamese by Trần Huy Quang and published online http://phongdiep.net/default.asp?action=article&ID=18590

"The Road" by Teresa Mei Chuc appears in Rattle issue #41 published in September 2013.

"Con Son" and "Depleted Uranium" appear in Hypothetical Review.  "Violin" appears as the August 2013 Monthly Feature in Everything Else: Hypothetical Review and my English translation of a poem (originally in Russian) by Anna Akhmatova is forthcoming in Hypothetical Review. http://www.hypotheticalreview.com/
"Teresa Mei Chuc's poetry fulfills the mission of telling stories challenging the narratives of the powerful and bringing into words the seemingly indescribable ways in which humans hurt each other. She takes us to "blue skies where bodies are falling from helicopters" and shows us coffins our hands could fit inside, where children have died from the environmental poisons of war. #HR poetry shoutout"
Two poems that I translated from the original Russian, "Giraffe" by Nikolai Gumilev and "All the magnificence..." by Marina Tsvetaeva, appear in the Spring 2013 issue of Aldus Journal of Translation.  Please click here to read the poems in Aldus Issue 4, Spring 2013.
"Coriolis Effect" by Teresa Mei Chuc is published online on La Bloga: The Most Incredible and Biggest Poem on Unity in the World, a project by Juan Felipe Herrera, California Poet Laureate - UNITY of Poets for the Children and Families of Newtown, Connecticut—End the Violence 10 Poems:  December 15-December 21, 2012
http://labloga.blogspot.com/2012/12/the-most-incredible-and-biggest-poem-on.html
The poems "When I First Saw Daddy" and "Moon Festival" were translated by Lê Đình Nhất Lang, and "Cam On" and "In Praise of Emptiness" were translated by HQ into Vietnamese and published in Vietnam on the website of Vietnamese poet Tran Nhuong. http://trannhuong.com/tin-tuc-13821/tho-teresa-my-chuc.vhtm
The poem "Gift" by Teresa Mei Chuc appears in the Fall 2012 issue of the Veterans Writers Group Quarterly.
"Names" translated into Vietnamese by Ngo Tu Lap was published in Van nghe Vinh Magazine in Vietnam in Summer 2012.
"Year of the Hare," a prose piece in a series of vignettes, appears in Big Bridge, Issue 17, Spring 2013. bigbridge.org

"When I First Saw Daddy," "Not Worth a Bullet," and "Moon Festival" were translated into Vietnamese by Le Dinh Nhat Lang and published online in Da Mau Literary Magazine, June 2011.  http://damau.org/archives/20517

A poetry chapbook, Truth is Black Rubber, was published in November 2010 by Silkworms Ink.
http://www.silkwormsink.com/chapbook_38.html

A cross-genre piece, "Newton's First, Second, and Third Law's of Motion," appears in the Fall 2010 Issue of The Pitkin Review.

A prose poem, "Newton's First Law of Motion," appears in the Fall 2010 Issue of the online literary journal, The Prose-Poem Project, and in the print edition of the issue (Equinox Publishing, Shelburne, VT) in October 2010.
http://www.prose-poems.com/pagetwoX2.html

"Cashews" appears in the May 2010 issue of Ascent Aspirations Magazine.
http://www.ascentaspirations.ca/cashews.htm

A critical commentary piece on translation, "Marina Tsvetaeva in a New Tongue," was published in the Spring 2010 issue of The Pitkin Review.
http://blogs.goddard.edu/pitkin/